Posted on November 5, 2020 by istsfor manity 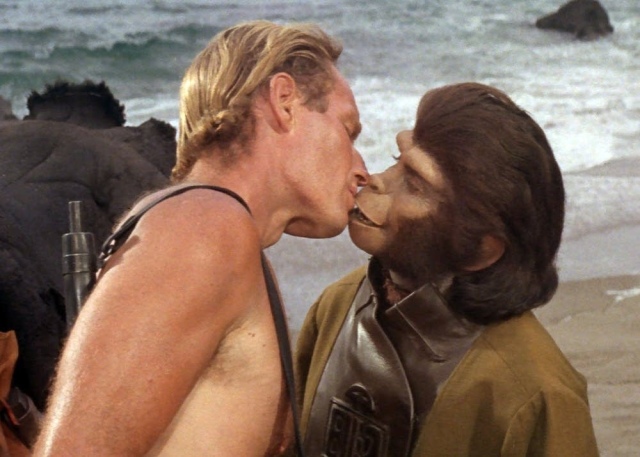 Chuck and Knuckles the Dog (Who Helps People)

Chuck Heston was in my head again.

I fell asleep last night thinking I need a new muse. I’ll be damned if Chuck Heston didn’t show up for self-appointed rounds through my REM sleep. Yeah, Chuck Heston must be my new muse. But he wasn’t alone, no. Here came Chuck Heston and Knuckles the Dog (Who Helps People).

So we’re driving downtown on a typical Saturday overnight. The fares are clicking over regular. Busy night, full moon. We just saw a guy taking a dump at the entrance to Duane Reade.

“What’s the new assistant manager going to do when she opens up the store tomorrow morning?” I say. “She’ll run her heel through the shit and nearly fall — save that she holds on to the door handle. Then that smell hits her and she adds her puke to the mess at her feet. Her new heels ruined, she fears. What kind of way to start the day is that, huh, Chuck?”

He’s busy tightening Knuckles the Dog (Who Helps People) red neck bandana in the back seat.

“Chuck, her heel arch is clogged with a runny shit meatball,” I say. “The knotted florets on her shoes are now spattered with last night’s calzone bile. Chuck? Chuck?”

He’s wild-eyed. He rolls down the window. He screams into the wind — to the darkened alleyways: “You maniacs. You blew it up. God damn you. God damn you all to hell!”

My own command performance in the back of the cab. Wow. He catches my eye in the rear view, spittle-mouthed and bleary-eyed, he says: “You take umbrage at my Rosetta Stone? Who do you think you are? Mr. Goodstuff? There are no more $3 whores in this town.”

“True that, Chuck. So very true,” I say, and offer him some Peppermint Chiclets.

He declines and says, “I’ve been home all the time.”

Knuckles the Dog (Who Helps People) barks at a group of Argentinians grilling steaks on the corner of MacDougal and Houston. They’re all decked out in cerulean blue and white striped jerseys, and chanting “AR-GEN-TI-NA, AR-GEN-TI-NA.” They invite us over for steaks by a 50-foot high bank of television screens all tuned to the 1978 World Cup.

A flash and we’re standing on the sidewalk with plates full of rice rolled up like strips of sod on gauze — each individual grain is inserted in to the gauze.

“It’s a roulade of rice and gauze,” he says.

Yeah? Ok, I say. “Gauze and all.” So I toss one to Knuckles the Dog (Who Helps People). He chomps it down.

The wall of screens go black and the Voice of America, interspersed with static, booms from the speakers.

Another lady appears who looks like Patti Smith with blonde frosted bangs and ends. Her face is covered with heavy white pancake, but her name tag reads: SWAGGY. She’s carrying an electric guitar.

An argument ensues between Swaggy and Ana about who is the better multi-instrumentalist. Punches are thrown and the Argentinians get involved. Chuck drags Knuckles the Dog (Who Helps People) away on a leash.

I attempt to sort this all out. A steak is at stake.

“The question is, how do you want to exist in the world, and how are you going to do the work?”